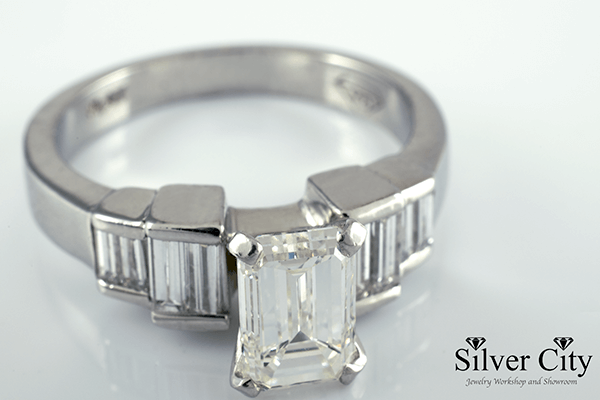 Platinum is a white metal that is similar in appearance to silver. Platinum is an alternative to white gold and silver for people who like jewelry made in a white metal. Platinum is the most expensive of the standard three precious metals, but also often considered the most prestigious.

Why choose Platinum for Jewelry?

For people who like all of their jewelry to be white metal, Platinum is a great choice. Platinum is naturally white, unlike white gold which will always be yellow-tinged. Platinum looks similar to silver, but doesn’t have the drawback of tarnishing. Platinum jewelry is typically harder to break and can be repaired by most jewelers. It is also extremely rare for a person to have allergies to platinum.

Is Platinum definitely better than white gold if I can afford it? (No!)

Platinum is typically considered to be more prestigious and is more expensive then gold because of its rarity. Platinum is not, however, a superior choice to white gold for making quality jewelry. Platinum has some properties that are better for jewelry and many that are worse. Platinum is also not perfectly white and has a color that some people will like better than white gold while others will not. Many, if not most, jewelers believe that white gold has more advantages to it then platinum for jewelry.

Because of the numerous properties of metals, it is easy to call one metal “stronger” then others if you only focus on one aspect of a metal’s strength. It is true though that platinum will handle some wear and tear better than gold does, and jewelry made of platinum typically is harder to break. White gold rings will sometimes use a platinum head to hold a diamond to add security because of platinum’s strength.

What are the drawbacks of platinum?

Platinum alloys used in jewelry are typically close to pure and the manufacturing process is more expensive. This makes platinum jewelry cost significantly more than gold, even if the market prices of platinum and gold are close to the same. Platinum is softer then gold and scratches more easily which makes it require polishing regularly. Platinum is also more labor intensive to work on and costs as much as double to repair. Platinum can also be a moderately dull grey color and is usually plated with a bright white metal when manufactured. After a few months when the plating wears off, some people can be disappointed with its color.